ZBA Featured in Journal of Business 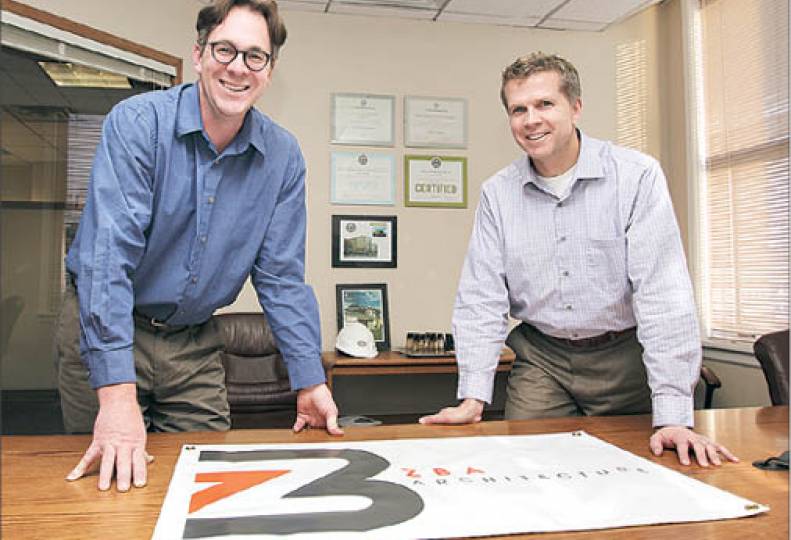 Randy Vanhoff and Mark King, the newest partners at ZBA Architecture PS, of Spokane, say they don't plan to stray from the firm's core business as they lead the firm through a rebranding effort.

ZBA, which was founded 29 years ago as Zeck Butler Architects PS, will continue to specialize in multifamily housing, serving low-income, senior, developmentally disabled, and farmworker tenants.

"Housing has always been part of the business," King says. "We enjoy being part of a larger overall mission to provide housing for people less fortunate—and decent housing at that."

Vanhoff adds, "We're returning to some of the projects (the firm) designed 25 years ago, and starting to do rehabs."

ZBA also designs shop facilities for utilities, fire districts, counties, and smaller municipalities, he says. One such project was a component of the $144 million Spokane Water Reclamation Facility, at 1004 N. Freya, in East Spokane, in which ZBA worked with the Spokane office of Colorado-based CH2M Hill to design the main office and public building at the facility.

Rod Butler and William Zeck started the firm in 1984. Zeck retired a few years ago and Butler then became sole owner until last year, when Vanhoff, 48, and King, 39, were named partners as part of a plan to succeed Butler in owning the company.

Since then, Vanhoff and King have put their own visual stamp on the firm with a new logo that plays off the ZBA acronym.

"A lot of people have been calling us ZBA anyway, so I think that's the way to go," King says.

ZBA, located on the eighth floor of the Paulsen Center, at 421 W. Riverside downtown, has a staff of 10, with five architects, including associate Bill Froemke, who has been with the firm for 19 years.

"We've been running lean in response to the downturn," Vanhoff says.

While the construction industry has been on the rebound, Vanhoff says funding for affordable housing has remained a challenge. Prior to the recession, such projects depended on tax credits that investors could buy, usually at some discount, resulting in savings on their tax bills.

"When people aren't making any money, they don't have to pay as much taxes, so they don't need the credits," he says.

As for projects in the pipeline, King says it's hard to project the firm's workload beyond three months. However, he adds, "That's not entirely new for this kind of work."

One ZBA-designed project currently under the plan-review stage of the city of Spokane's permitting process is a planned $10 million renovation of the 13-story Lilac Plaza low-income senior apartment tower, at 7007 N. Wiscomb, on the North Side.

Kop Construction Co., of Spokane, is the contractor on the project, which will include remodeling all 174 living units and common areas in the tower. The project also will include upgrading the electrical, plumbing, and heating, ventilation, and air conditioning systems in the 41-year-old structure.

The project is expected to be completed by late 2014.

ZBA has been on the forefront of the sustainable design movement, Vanhoff asserts, adding that Butler and he were among the first architects in Eastern Washington to earn Leadership in Energy and Environmental Design (LEED) accreditation. The LEED program is administered by the U.S. Green Building Council, a Washington, D.C.-based nonprofit developer of standardized green-building rating systems.

LEED rating systems evaluate design and construction through a checklist of sustainable criteria using a point system that rates projects at silver, gold, or platinum levels.

Butler was lead architect on the first project located between Seattle and Minneapolis to achieve the highest LEED rating of platinum. That project involved the renovation and modernization of the historic Saranac Building, at 25 W. Main. To qualify for the rating, the project had some design features new to Spokane and required some construction materials that were hard to come by, Vanhoff says. That took commitment from the project owner, former Spokane attorney Jim Sheehan, he says.

The Saranac's many green features include solar paneling, wall insulation made from recycled cotton, sustainably harvested lumber from local sources, and a rooftop rainwater collection and distribution system.

In what the firm says was another first, it designed the Tepeyac Haven apartment complex, in Pasco, Wash., in 2007. The $7 million, 44-unit apartment complex, was the first affordable-housing development in the U.S. to receive a gold designation under the LEED for Homes category, Vanhoff claims. M.C. Lundgren Inc., of Deer Park, was the contractor on that project.

Now that LEED accreditation is more common, if not expected of designers, ZBA is looking for the next advances in sustainable design.

"It's part of our culture to look ahead," Vanhoff says.

Green building standards also are evolving into requirements by some agencies.

Butler was a member of a 26-member advisory committee that recently helped develop the latest standards adopted by the Washington state Department of Commerce, called the Evergreen Sustainable Development Standards.

Through energy and water conservation and other environmental benefits, the standards are designed in part to reduce resident and project operating expenses, ensuring that total costs to residents remain affordable. The Evergreen standards are required for any project that receives funding through the state's Housing Trust Fund.

ZBA designed Walla Walla Family Housing Phase II to meet the Evergreen standards. Walker Construction Inc., of Spokane, is the contractor on that $9 million, 68-unit farmworker housing project, which is scheduled to be completed next September.

ZBA's current project designs range in scope from a four-unit HVAC system renovation to the $20 million Clare View project on the South Hill. That project includes constructing 61 new senior apartment units in five buildings at 3145 E. 44th, and rehabilitating the nearby 124-unit Clare House Apartments complex, at 4827 E. Palouse Highway. Spokane Housing Ventures, a nonprofit community-housing organization, is developing the project, which is nearing completion, and Whitewater Creek is the contractor.

In another current project, ZBA designed the Appleway Court complex, the $4 million, second phase of which is under construction just southeast of the Appleway Avenue-Farr Road intersection. Spokane United Methodist Homes is developing that project, with Community Frameworks assisting in putting the financing package together. Kop Construction is the contractor on the 24-unit project, which is scheduled to be completed March 1.